There are two different ways to create a std::shared_ptr: via one of its constructors and via std::make_shared. Both have their merits and different tradeoffs.

First of all I’d like to thank my colleague Stefan Asbeck for a chat session where we brainstormed about the different aspects I’ll go into. Stefan is a software engineer at the Zühlke office in Munich.

shared_ptr and weak_ptr: a short overview

weak_ptr refers to the reference count structure and can be converted to a shared_ptr if the count is not zero, i.e. the object still exists. For reasons we’ll see in a second, there has to be another counter for the number of weak_ptrs.

shared_ptr is non-intrusive, which means the count is not stored inside the object itself. This, in turn, means that the count has to be stored somewhere else, on the heap. When a shared_ptr is constructed from an existing pointer that is not another shared_ptr, the memory for the count structure has to be allocated.

The structure has to live as long as there are any shared_ptrs or weak_ptrs left, which may well be after the object has been destroyed. Therefore, the number of weak_ptrs needs to be counted as well.

Conceptually, we can think of the situation like this (the actual implementation details can differ): 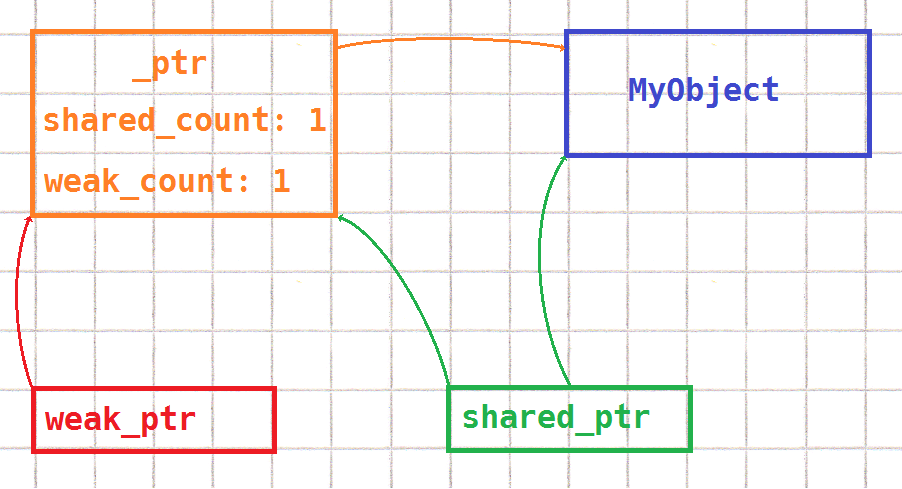 With the above picture, when we create an object managed by shared_ptr, the naive approach takes two memory allocations:

The situation is the same whether we create the shared_ptr from a raw pointer, from a unique_ptr, or by creating an empty shared_ptr and later resetting it with a raw pointer.
As you may know, memory allocations and deallocations are amongst the slowest single operations. For that reason, there’s a way to optimize this into one single allocation:

std::make_shared allocates the memory for the reference count structure and the object itself in one block. The object is then constructed by perfectly forwarding the arguments to its constructor: 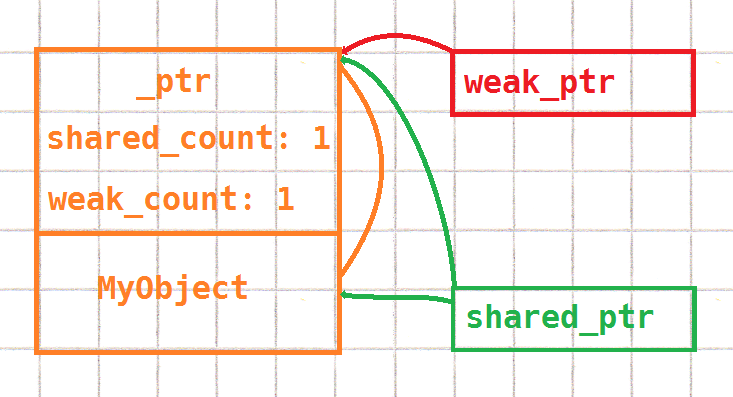 Pros and cons of make_shared vs. normal shared_ptr construction

As always in life, nothing comes for free. Using make_shared entails some tradeoffs we should be aware of.

The big advantage of make_shared is, of course, the reduced number of separate allocations. When the other tradeoffs are not an issue, this is the single reason why we should use make_shared as a default.

Order of execution and exception safety is another issue that has to be kept in mind, at least before C++17. Imagine this piece of code:

There are three things that have to be done before foo can be called: constructing and allocating the A, constructing the shared_ptr, and calling bar_might_throw. C++17 introduced more restrictive rules for the evaluation order of function parameters. Before that, that sequence could have looked like this:

If step 2 throws, step 3 is never reached, no smart pointer takes ownership of the A pointer, and we have a memory leak. make_shared takes care of that issue.

One of the regularly encountered drawbacks with make_shared is that it needs access to the constructor it has to call. Making make_shared a friend of our class is not guaranteed to work – the actual constructor call may be done inside a helper function. One possible workaround to this problem is the passkey idiom. This is a bit clumsy and might not be worth the effort if a second allocation is not an issue.

Another problem might be the lifetime of the object storage (not the object itself). While the pointee object is destroyed when the last shared_ptr releases its ownership, the ref count structure needs to live on until the last weak_ptr is gone. When we use make_shared this includes the storage for the pointee object. When we deal with large objects and long-lived weak_ptrs, that can mean that a considerable amount of empty memory is needlessly locked. 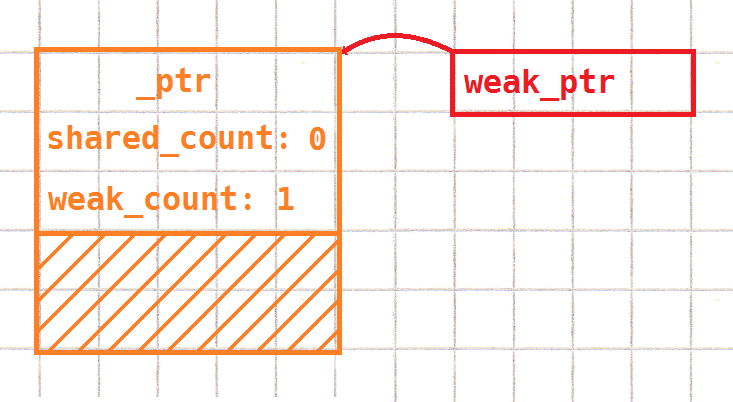 While std::make_shared is a good default for creating shared_ptrs, we have to be aware of the implications. Every best practice has its exceptions, there are no absolute rules.